JIMIT signs Memorandum of Understanding with the University of Yaoundé II, Soa for Academic mentoring 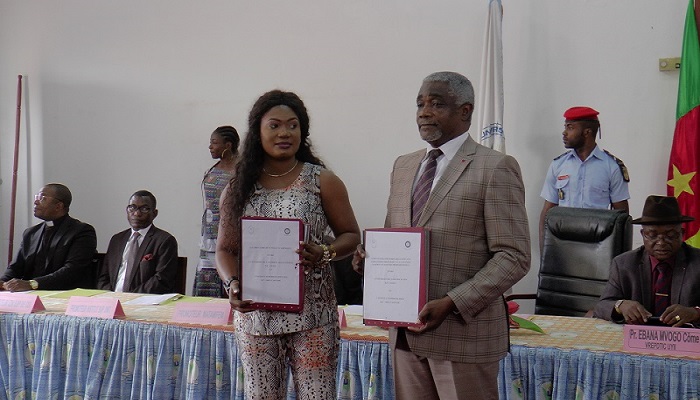 JIMIT signs Memorandum of Understanding with the University of Yaoundé II, Soa for Academic mentoring

Tuesday, October 15, 2019 was a particular day in the life of the JIMIT University Institute, Yaoundé as it signed another fruitful Memorandum of Understanding (MoU) with one of Cameroon’s biggest state universities, the University of Yaoundé II (UYII), based in Soa in the presence of the representative of the Minister of State in charge of Higher Education and Grand Chancellor of Academic Orders.

Chairing the ceremony at the auditorium of the Soa campus was the Rector of the UYII, Professor of Adolphe Minkoa She who signed on behalf of his institution and Mme Mary Jose Nabola for JIMIT.

Both JIMIT and UYII have promised to respect and implement the terms of the MoU which would address different angles of the academic mentoring. With its two schools and two gigantic faculties and a host of research institutes, UYII has become another academic plus for JIMIT.

According to the MoU, JIMIT would be closely knitted with the university’s biggest faculty, the Faculty of Laws and Political Science as well as one of Africa’s oldest Journalism and communication institutes, the Advanced School of Mass Communication, ASMAC. The signing comes after a visit to JIMIT by an inspection team from UYII which gave JIMIT a satisfactory mark and judged it fit for academic mentoring by a state owned university.

Essentially, UYII through the faculty and school shall mentor JIMIT in the training of students in related fields. It shall supervise and validate examinations including questions and results of students. UYII shall also supervise end of course examinations and defense sessions of graduating students. Other angles to be addressed by the MoU include research and teaching, seminars, forums and workshops and other related aspects. Moreover, as from 2019/2020 academic year, UYII would also issue degrees and certificates for students graduating from JIMIT University Institute.

According to the overjoyed and dynamic founder of JIMIT, Mme Mary Jose Nabola her institution would uphold the high standards which is behind the MoU with the state owned institution. She also indicated that the MoU would usher in greater tidings for her institution.

Essentially, the MoU is a big win for not just JIMIT management but most importantly for its student population which would greatly benefit from a partnership of such a magnitude.